I’ve been enjoying my XM radio immensely, the 80s and 90s channels are great, playing some really obscure records that I had long forgotten and even some Cliff Richard! There are occasional dropouts in the sound, presumably from the positioning of the antenna on the dashboard rather than on the roof, but they are few enough that they are not a major annoyance.

Circuit City had left the installation of the SkyFi unit as I didn’t know where I wanted it or even how to do it. After some research I decided to go with installing it near the toggle switches using a Pro-fit Ultimount from xmfanstore.com. 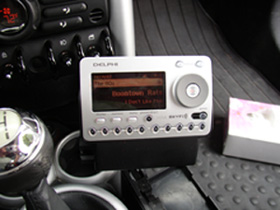 So far I like the positioning and there is enough leeway to tilt and turn it a fair bit. However I have lost the use of the cup holder beneath it and will have to see if I can move it to the other side or get a new one from somewhere.

To get a closer look at the install, take a look at my handy skyfi install page.